Every adult should drink around 2-3 liters of water per day according to science. The exact volume for athletes is not well-defined but is certainly much more.

In the brutal sport of tennis, you often see professionals sipping various drinks during changeovers. The amount players drink is no surprise, but you may be wondering what all those strange colored liquids are.

Table of Contents show
1 The Most Important Drink For Tennis Players
2 Tennis Depends on Hydration
3 What Are The Benefits of Drinking Frequently?
4 What Do Players Drink During Matches?
4.1 Water
4.2 Electrolyte Drinks
4.3 Energy Drinks
5 Why So Many Drinks?
6 Takeaways

The Most Important Drink For Tennis Players

The most important drink for tennis players is water. Beginner players may rely solely on water to refresh and rehydrate themselves while playing.

Advanced players who undergo punishing training and matches need to replace minerals lost in sweat with electrolyte drinks. This explains the pink and yellow liquids that players are often seen drinking.

While conventional caffeinated energy drinks are not recommended, healthier alternatives can provide players with a much-needed boost in a match. Research shows that caffeine can have a significant positive impact on tennis players, especially in the latter stages of a tennis match.

Now we will explain the importance of hydration in tennis plus the benefits of each beverage that players drink.

Adequate hydration is one of the pillars that tennis is founded on. Drinking enough of the right liquids during a match or training is as important as the game’s fundamentals. For the sake of your level of play and overall health, it is imperative to avoid dehydration.

Tennis matches can be contested in some of the hottest places in the world at the height of summer (e.g. the Australian Open). Even when you don’t exercise, such an environment poses a huge dehydration risk. That risk increases exponentially for people pushing their physical limits for hours non-stop.

Furthermore, this is a sport that leaves you fully exposed to the elements. Except during changeovers, players may have to endure direct sunlight that dehydrates them even faster. In the short breaks between games and sets, competitors must use every second to catch their breath and replenish lost fluids.

While drinking ice cold beverages seems tempting, especially in hot weather, many players avoid doing so. The reason is that very cold drinks can shock the stomach and even cause pain/digestive issues.

What Are The Benefits of Drinking Frequently?

The reasons for drinking a lot are more extensive than you might think.

1. Replacing lost fluids: This may seem obvious, but your body is thought to comprise 70% water. From the blood in your veins to the liquid in your cells, your body runs on fluids. When your fluid stores deplete you deprive your brain and body as a whole.

2. Regulating body temperature: By drinking fluids, you enable your body to maintain its temperature through sweating. When you sweat, the evaporation cools your skin.

3. Replacing lost electrolytes: Sweating is important, but it has a cost. You not only lose liquids but also electrolytes. Electrolytes are minerals that are crucial for many bodily functions. Drinking sports drinks is one way of replacing them.

4. Re-energizing: During a match, you burn a lot of calories but have limited opportunities to eat solid food. Except for energy gels and bananas, players can rely on drinks to re-energize in a match.

What Do Players Drink During Matches?

Regardless of your level, you cannot escape the basic need to drink plain water. Many players find this simple beverage the most refreshing and easiest for their stomachs to handle. Also, given the amount that players sweat, energy and electrolyte drinks will not be enough to replace lost bodily fluids.

Consequently, water forms a key part of a player’s liquid intake both in training and competitions. The presence of water in professional matches is obvious. During the change of ends, you will always see players sipping on plain water ― many tournaments store water in refrigerators on the court so that players can top up mid-match.

Younger and less advanced players may only drink water to refresh themselves while they play. Indeed, for less intense tennis, water alone is more than enough. Yet as you know by now, sweating does not just deprive players’ bodies of water. This process also represents the loss of salts and minerals which are essential for cognitive and muscular functions.

Bottled or tap water does contain small amounts of electrolytes, but nowhere near enough. Hence, when tennis gets very physical, players must rely on other beverages as well to stay in peak condition.

The most important electrolytes include minerals such as sodium, potassium, calcium, and magnesium. For everyday activities, a balanced diet should give you a sufficient quantity of each. Elite tennis matches do not allow much time for eating, so players need to replenish electrolytes through drinking instead.

The assortment of colored liquids that you see the pros drinking is primarily water mixed with powder or tablets. These drinks may also contain lemon or orange juice. Apart from hydrating, these colorful and flavorsome drinks will replace much-needed minerals during a match.

When you picture an energy drink, cans of sugary carbonated Red Bull might spring to mind. While these are sure to provide a quick spike in energy levels, the effects will quickly wear off as your blood sugar drops. That is why professionals are unlikely to consume these types of drinks.

With that said, healthier alternatives to standard energy drinks do exist. Healthy energy drinks contain little to no sugar and offer a natural, plant-based energy boost that will last much longer. Players can consume energy drinks alongside energy bars and gels to keep fatigued at bay.

You can read more about what tennis players drink during matches in this post.

Why So Many Drinks?

You will notice that the majority of players at elite levels drink various drinks in a given match. That is because one type alone isn’t enough to meet their bodily needs.

Each player is different and needs to work out which combination works best for them. Also, depending on the conditions and how they feel, players will drink varying amounts of different beverages.

For instance, in a short qualifying match, players may only need an occasional sip of water to stay hydrated. A brutal 5-set war at a Grand Slam will call for the frequent intake of electrolytes and perhaps some energy drinks too.

The combination of drinks that tennis players consume is very methodical. High-level sport pushes you to your physical limits, so you need excellent hydration to match.

Water by itself will not replenish vital minerals used for muscular and neurological processes, hence the need for electrolyte drinks.

As a tennis player, you need to figure out what suits you with regard to hydration. Truthfully, finding the right selection of drinks to get you through a match is as important as finding the right racquet or playing style. 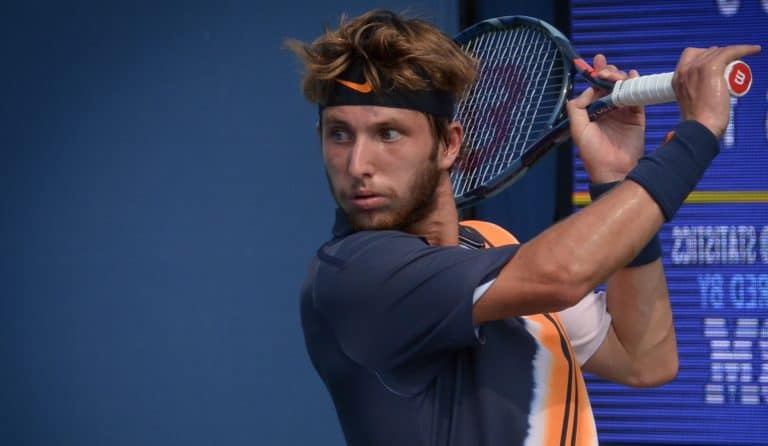 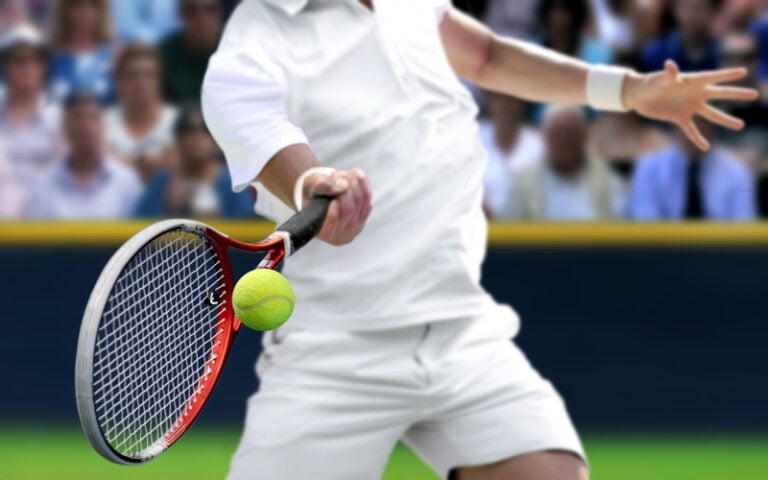 Hot summer days can be very challenging for tennis players who have sweaty hands. After being on the court for hours, losing control of the racquet is very easy when the hands are full of… 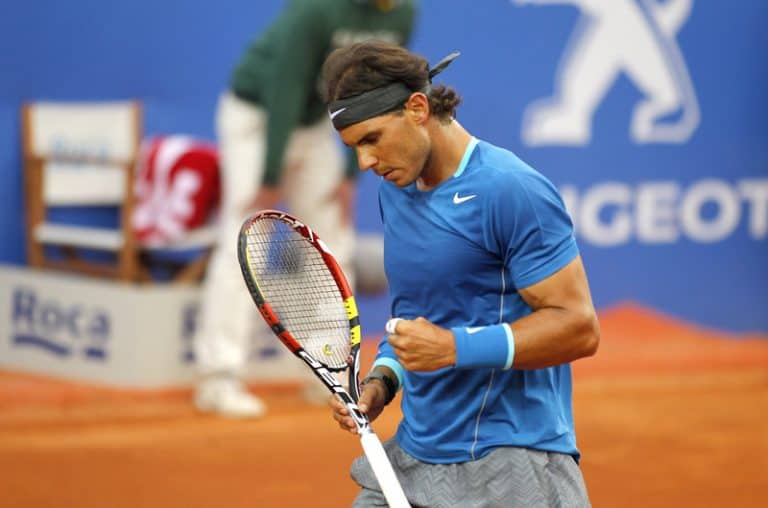 One of the crucial parts of any set in tennis is when a returner has a chance to win a point. Since servers have the advantage of starting a point, winning a game as the… 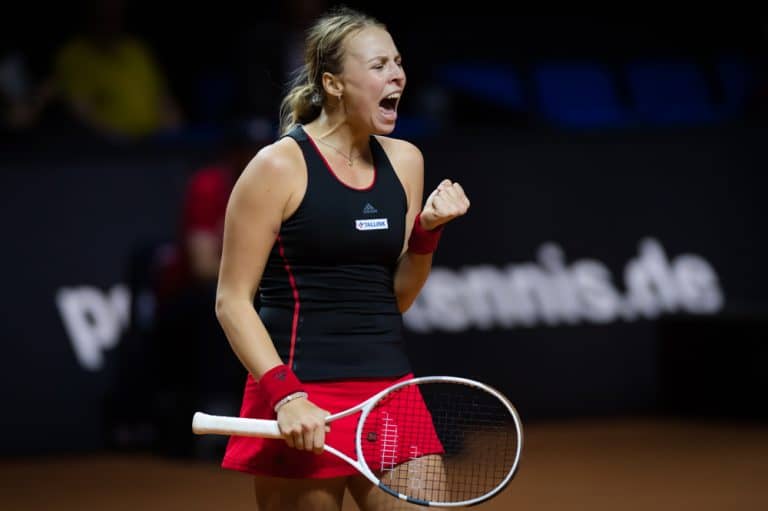 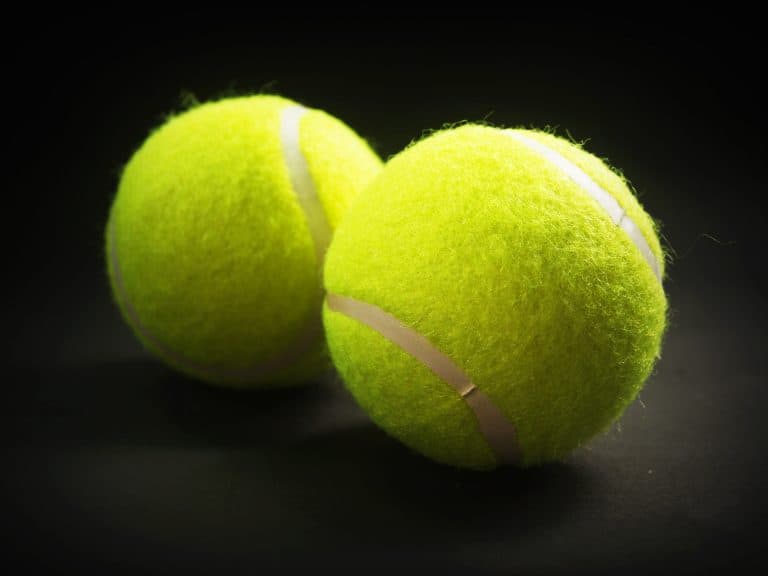 Even for people who don’t play tennis, everyone is familiar with what a standard tennis ball looks like. It’s a bright, fluorescent yellow that might seem like a normal ball from afar, but it’s also…